For the first time Google has shared images of its data centres around the world, which include primary-coloured pipework, cooling rooms that glow green and bicycles for staff to get around. The unseen images are available on a new website called Where The Internet Lives where it is possible to do a virtual tour of eight Google data centres around the world in addition to Google Street View tour of itsNorth Carolina settlement. This significant giant makes use of the building to process massive amounts of data, featuring three billion Google search queries a day and 72 hour of YouTube videos a minute.

The location and design of each data centres benefits from its contiguous environment. For instant, in Hamina, Finland, the data centre occupies a machine hall designed by Alvar Aalto, which uses sea water to refresh the building and decrease energy usage.

G-bikes which are small yellow bicycles are used by Google members to get around in the colossal building and pink pipes transfer water from the green chillers to an exterior cooling tower. 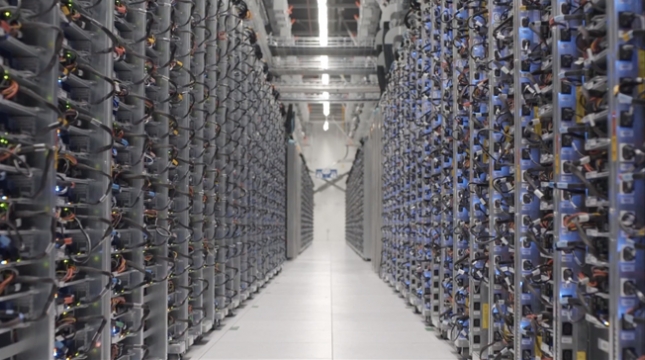 Google has its fibre optic network connecting its site with the yellow cable trays near the ceiling and runs at 200,000 times faster than a normal home internet connection.  Plastic curtains are used to keep cold air inside the building; therefore they act as a barrier.